If you look at the Statistics the number of devices connected to internet in 2018 are more than 23 billion, which is nearly 3 times  population of the complete Earth, which is 7.6 billion, this number is increasing more and more and expected  to reach 75+ billion within next 10 years, more than human beings, there would be devices seen everywhere in the world, even if now days if you see around you, people are more connected to devices than each other.

IOT which stands for “Internet of Things” is nothing but, devices which are connected with each other with the help of internet. Therefore, this connectivity permits these devices to be online any time to share data between them, not only to examine but also for automation and for taking real-time decisions based on these data.

To simplify this, just take an example of IOT, related with medical patient, which is considered as most critical situation, now consider, a patient who is alone in his bedroom. He cannot move and he is with many medical sensors which are connected to his body like blood pressure, heartbeat, pacemaker, breath rate and

Now let us consider that the monitor detects some abnormal physiological activity which can lead to cause cardiac attack. And hence, it sends an alarm as indication to the IOT network which is having patient’s location and his medical record.

Hospital and ambulances are also connected to this network and will receive this information.

Then this will happen:

Immediately, the ambulance which is nearest will rush to the patient location they got. And take him to the hospital as early as possible. Which will save plenty of time required by looking manually for the nearest available ambulance.

Meanwhile, the hospital emergency doctors can get a detailed medical record of this patient and his current medical status. And therefore, it will be possible for them to execute medical procedures which are required, in no time when the ambulance delivers the patient. And for one more time, this will help to reduce the normal delay caused by extra examinations which are performed on the patient to examine condition of his health

And from this example, we will come to know importance of IOT as well as key elements of IOT, which are:

Now let us take one more example of IOT from day to day life which will be the Internet-connected fridge. If it is going to detect for every single time that there is a shortage of any product which we use regularly, like milk, it will automatically purchase milk from the online store

How does IOT work?

IOT system includes some devices, these devices are connected through the Internet to some online network which is known as platform. At the same time, the devices can be monitored, managed and controlled by users by using an application.

Components of an IOT system:

Devices, we can also say as sensor, they just collect data from environment, here, devices we mean that could be combination of many sensors just like our cell phone, it is having multiple sensors which collect data from environment, other example is like collecting temperature, humidity, percentage of nitrogen, oxygen, co2 in air, we will need different sensors for that and hence from now onwards we will call them as devices.

so the first component in IOT will be sensor or combination of multiple sensors, (which we will call devices) collects data from real environment.

IOT platform is nothing but a software which is online hosted. After data is collected and sent on the cloud, further processing is done by this IOT platform, processing could be easy as like comparing temperature of AC/heater whether it’s in  normal range or not, also it could be complex like our first example of patient monitoring system, IOT platform will decide to call nearest ambulance and send his data to the hospital, but what if condition requires human interference as even if after sending data to hospital, it is doctor who is needed to perform further action or if temperature is too high when heater is on or too low when AC is on, so here user is going to need human interference and hence last and forth component of IOT comes into picture that is application or user interface.

The bridge between the user and the platform is known as application or user interface. So, at the time when user wants to monitor, configure or control a device, he will interact with the application.

Again taking reference of the patient and hospital example, here, user’s part is played by doctors. Here, application can help doctors to monitor the patient’s graph of Heart and to apply control measures accordingly.

The doctor can manually give orders to the platform by using the application to tell the defibrillator device to give a shock to the patient’s heart until the ambulance reaches him.

The doctor configures the application, which will by default tell the platform to order the defibrillator device to give a shock to the patient’s heart until the ambulance reaches him. therefore, with the help of application which is connected to the platform, all devices’ data along with actions can be monitored.

Now as we know basic components of IOT, the question is how these devices communicate with each other?

Internet of Things (IOT) really provides us so much benefits. But what will happen if it gets hacked? There are numerous techniques which are used for hacking, these techniques are covered in ethical hacking course in pune, as to catch a thief, you need to think like one. To make secure our IOT devices is a big challenge and more important to us also. Just think about it that if ATM machines get hacked because ATM  secured. 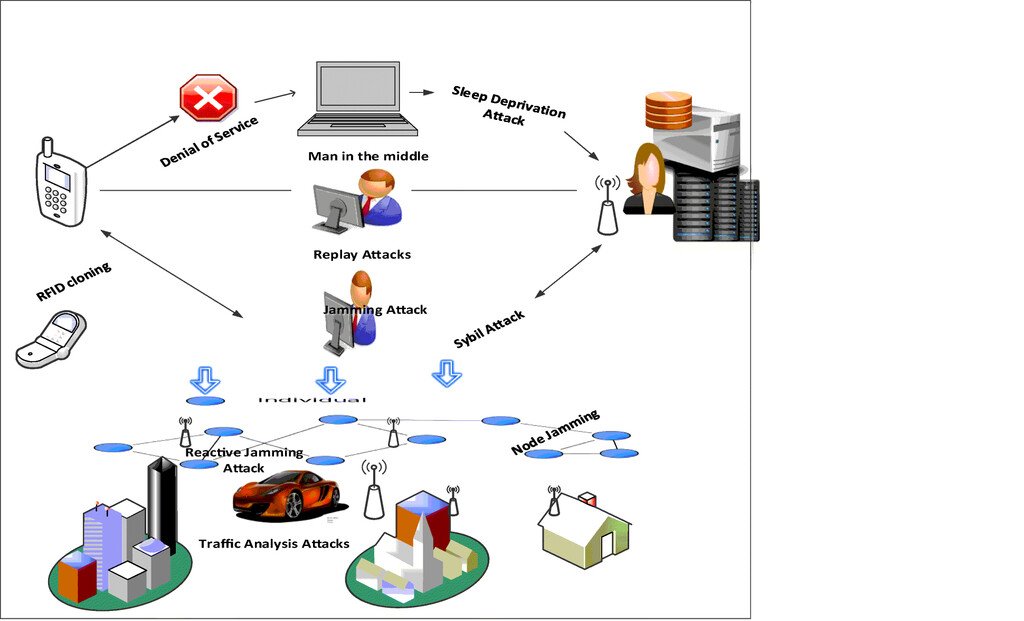 DDoS stands for Denial of service. If DDoS attack is performed on IoT devices then it will be unresponsive. After performing DDoS attack on IoT device then that device will not do his work which it is built for.

BlueBorne is a Bluetooth vulnerability. With this vulnerability device’s security can be compromised like gaining access to the device unauthorised. It can be performed with different techniques to exploit.

Jamming attack is performed by jamming the network of IoT device is using, after that, all the signals which are sent and received to work IOT infrastructure will be jammed and hence there would be no synchronisation with components of IOT devices and functioning will be stopped.

and there are many more attacks, now if we want to secure our infrastructure from these kinds of attacks, we need to apply some preventive techniques, there are some techniques which are mentioned below :

Preventing IoT from hacking devices is recommended by manufacturing companies. There are numerous ethical hacking courses specifically in pune which also teach this prevention from IOT hacking

It’s very hard to believe about rapid and excellent growth in the Internet of things in such small time span, but the way in which it is growing and capturing everything is excellent. Recent survey says, Accenture has strong belief that market of IOT will reach $14.2 trillion in 2020. IDC says, there would be around $1.2 trillion spending in IOT in business field alone. Bain says it’s market to grow to about $520B in next two years. IOT is considered as one of the powerful field and reason behind it’s strength lies in the world’s topmost companies which are using this IOT technology. The below mentioned are the top 5 IOT companies in which every single person is having dream to work with. 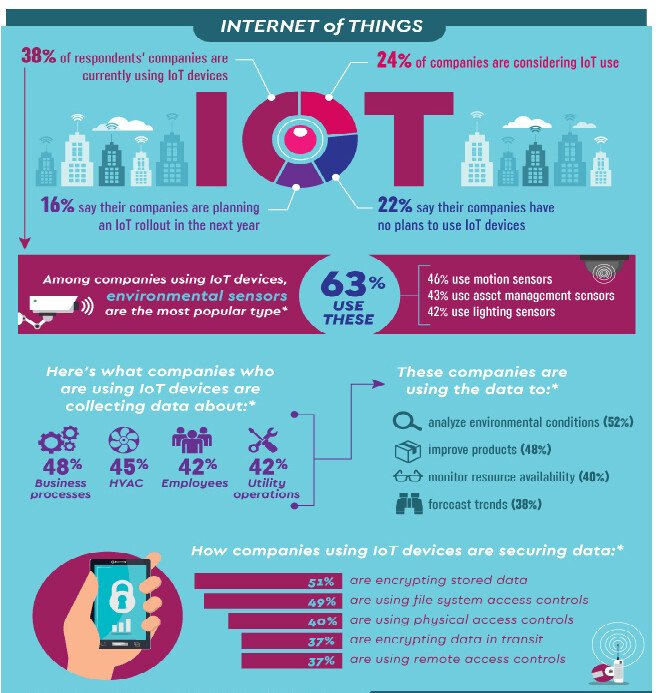 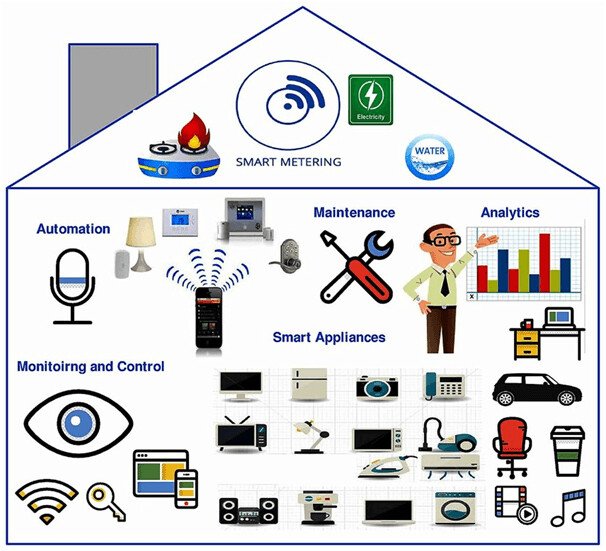 When it comes about use of IOT in day to day life, the first thing that appears every time is Smart Home. Smart home or also known as home automation system ranks as topmost IOT application on every channel. The number searches related with smart homes or automated homes  increases every month with about 64,000 people and still counting. Another interesting fact is the database of smart homes for IOT Analytics consists of around 257 companies and start ups. There are many companies which are now actively being involved in smart homes than similar other applications in the field of IOT. The amount which is estimated of funding start-ups which uses IOT is more than $2.5bn and is increasing. The list includes one of the fastest growing start ups like AlertMe or Nest also number of multinational corporations like Philips, Haier, or Belkin etc.

Similarly of smart homes or automated homes, wearable biosensors remain topmost and one of the potential IOT applications. Example which was used to explain IOT operation in the blog was of wearable biosensor. Every year, users from all the world waits for the release of Apple’ smart watch. Also, there are multiple other wearable devices that make our life easy like the Sony Smart B Trainer, or LookSee bracelet, the Myo gesture control. 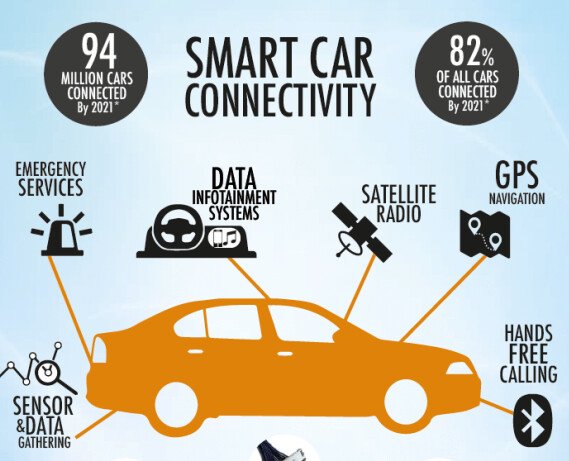 Smart car technology is a very wide and an extensive network of number of sensors, antennas, embedded software, and technologies that helps in communication to navigate in world. It has the authority of making decisions with consistency, accuracy, and speed. Here, complexity will increase as there would be no more human interference to control wheel, speed, apply breaks and so on, this technology is tested successfully on highways. 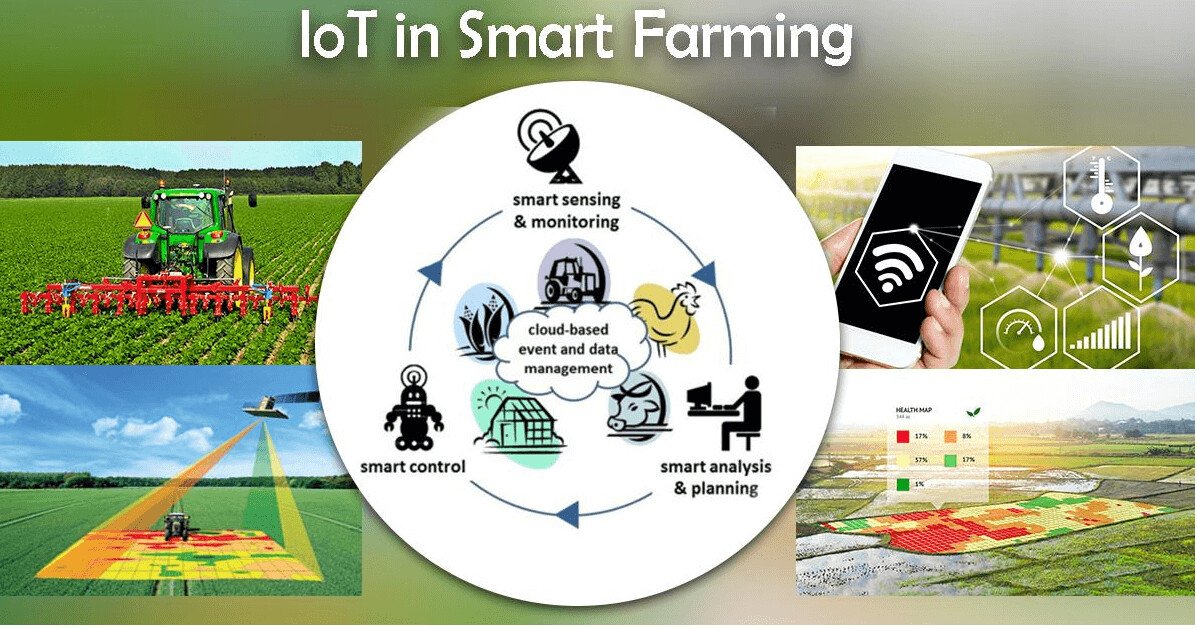 Smart farming is an often overlooked IOT application. However, because the number of farming operations is usually remote and the large number of livestock that farmers work on, all of this can be monitored by the Internet of Things and can also revolutionize the way farmers work. But this idea is yet to reach a large-scale attention. Nevertheless, it still remains to be one of the IOT applications that should not be underestimated. Smart farming has the potential to become an important application field specifically in the agricultural-product exporting countries.

Among many uses of IOT, one of the major use which can be done is in education sector. An excellent college always has the facilities which function in a easy way that gives a better stage to understand concepts to each student personally. The smart devices are used within the campus employ wi-fi community to transport facts and take commands. A proper internet of things device for faculties and students helps to create easier and smarter lesson plans, maintain plan of critical resources, improving admission graphs, design safer campuses and so on. 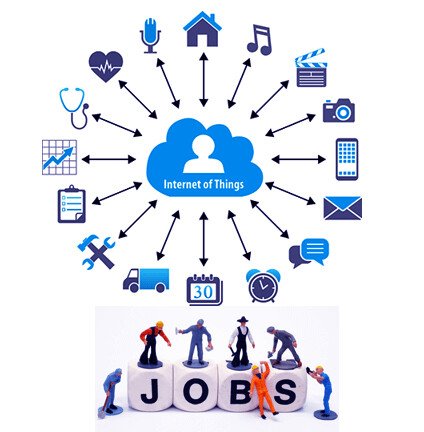 These are the following Career opportunities in the Internet of Things: